Here we are on the other side of Christmas…hope yours was very merry! I loved tucking the boys in on Christmas Eve. They got their pajamas on early and wanted to “get to it”, thinking that the faster they got to sleep, the sooner Santa would get here. I can remember that feeling of excitement as a kid, when you just can’t believe that Christmas has FINALLY come!

As an adult I get a funny feeling when it’s over. Like, “what was that?” The house looks like it was hit with a colorful bomb…toys, candy, wrapping paper, new socks and books strewn about. It’s a beautiful mess. 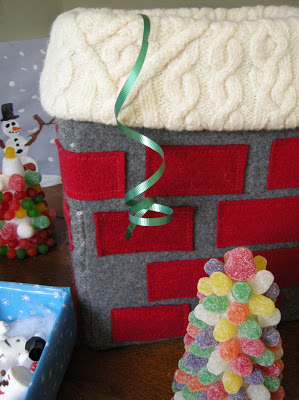 Meanwhile, I thought I’d take a minute and fill you in on that project I started (and finished!). It’s one of my family’s traditions called a Jack Horner Pie, and its something we do on Christmas Eve. I Googled it, and it seems that there are lots of versions of Jack Horner Pies, but I’ll share the way we do it.

On Christmas Eve, after dinner when the little ones cannot bear another minute until gift time, let alone until morning, we pull out the “pie”. For some reason, ours has always been in the shape of a chimney, which I love. We clear the center of the table and put the chimney out. Inside there’s a small gift attached to a long ribbon with each person’s name on a tag at the end. Everybody gets a hold of their ribbon and pulls! Pop! Out of the chimney comes a little gift. Just enough to tie you over until the morning. This year I wrapped up each person’s “annual” ornament for the Jack Horner gifts.

The last few years we’ve had a cardboard box covered in red flannel with masking tape “mortar” marking out bricks. I put that polyfil snow stuff around the top. It was not pretty and was getting really ratty looking, but it worked in a pinch. This year I decided to make a nice one that would last for many years…hopefully! 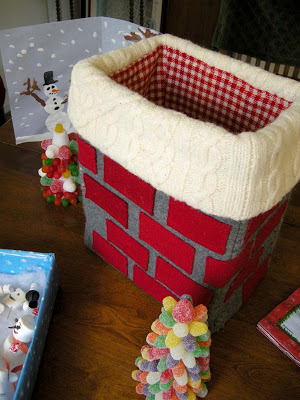 This JHPie is made with felted wool sweaters (natch). I used charcoal gray to cover the box and appliqued red felt bricks. The top edge is a felted fisherman sweater to look like snow. The inside is lined with a beautiful red and ivory checked wool that was given to me. (It was originally a skirt.) I worked on it off and on over the weekend. The boys were very encouraging, checking on my progress and critiquing my work. I had a few structural issues and things were touch and go for a bit. But I was reassured that it looked good and that chimneys aren’t perfect and snow is supposed to be “bumpily”. 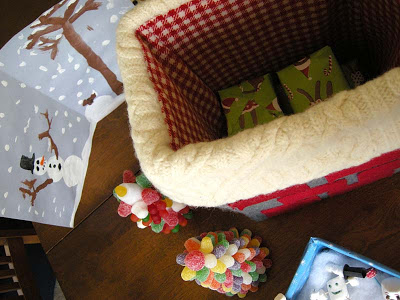 Hope your Christmas was just as magical with your own family’s traditions!

Betz White
Designer, author, felt & fabric artist and creator of sewing projects for you and your family. Betz on Google+ | Twitter
Recent Posts
Showing 11 comments
About this Website