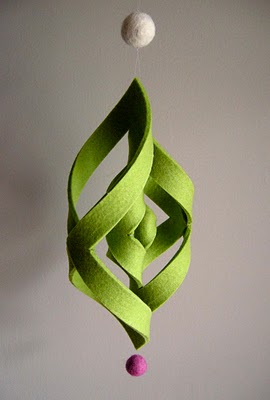 I woke up this morning with an image in my head of a felt snowflake. So I asked my kids to make a few traditional fold and cut paper snowflakes for me before they left for school. I wanted to use them as templates for my idea. Instead, my 10 yr old showed me a 3D paper snowflake they had made in his art class. I loved the beauty and simplicity of it, so I changed my course! After some quick google research, I’ve found that apparently this particular 3D Paper Snowflake is quite prevalent on the internet. (there is even a 3D Paper Snowflake Flickr Group!) I made a few prototype attempts, applying the 3D Paper Snowflake Tutorial to felt and came to the following conclusion… 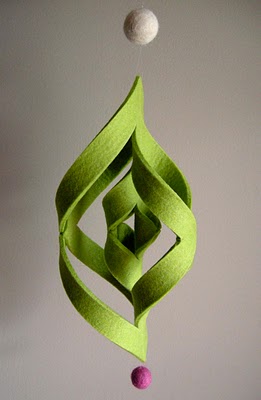 …it worked! I am in love with the curves and the “Ogee” shape of this design. It amazes me that it is created from a square and a few straight cuts. The original paper snowflake is made up of 6 of these shapes, each becoming one “arm” of the snowflake. I decided to stop at just one shape. The following design uses a thick 3mm 100% wool felt. I had been saving this piece for just the right project, and this was it! 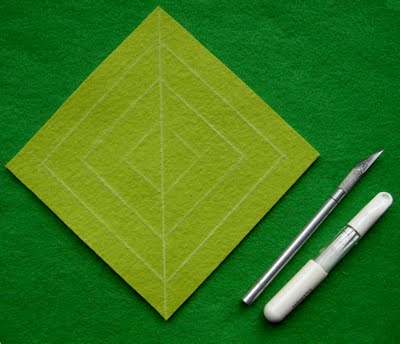 Step 1: Cut one 6″x 6″ square of felt. (For a piece this large, the felt needs to be pretty stiff, such as this 3mm wool felt. A 2mm thick felt would also work well, but I suggest decreasing the overall scale of the design for better stability.) Mark lines 3/4″ apart, parallel to the perimeter, using a chalk liner pen. Mark a line diagonally across the square from corner to corner.

Step 2: Using a straight edge and an Xacto knife, cut along the first line from the corner to about 1/4″ from the diagonal line. Make 2-3 passes with the blade, cutting a little at a time and keeping even pressure on the straight edge so that the felt does not creep while being cut. 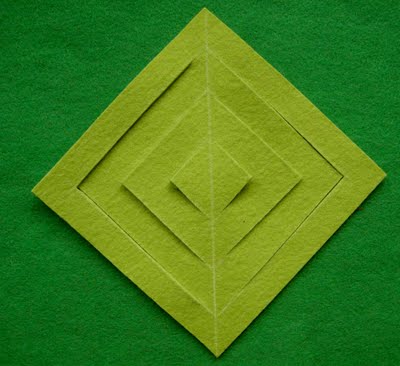 Repeat until all cuts have been made, keeping the felt intact at each corner on the diagonal line. Chalk lines can be brushed away. 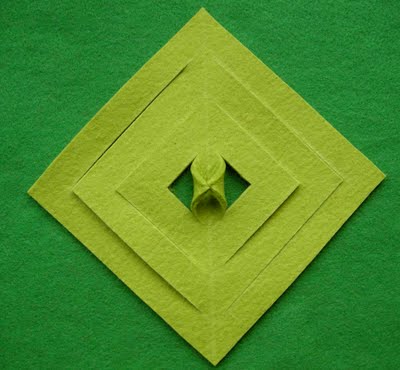 Step 3: Lift the corners of the center square and hand stitch the ends together with matching thread. Secure and cut the thread, hiding the knot between layers. 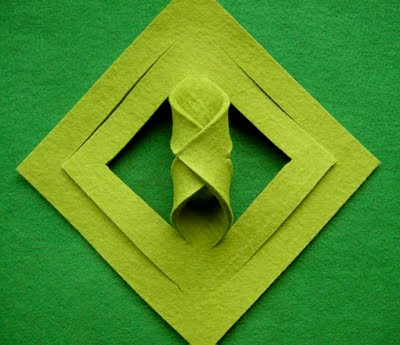 Step 4: Turn the piece over and lift the corners of the second square. Overlap the points and stitch together at each point. 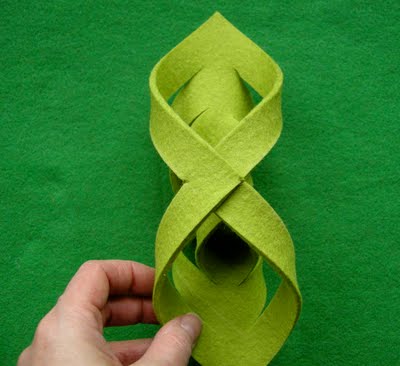 Step 5: Continue turning the piece over, overlapping points and stitching until all 4 squares are stitched. 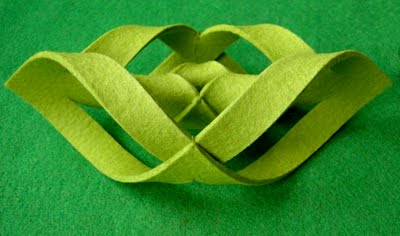 Step 6: Create a hanging loop at one end with a clear monofilament thread. I added a few felt balls (natch) to mine. 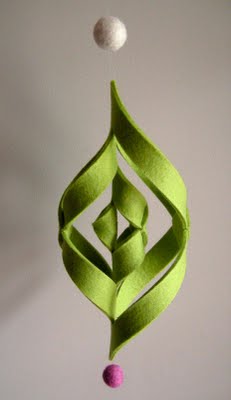 This makes a large ornament, about 10″ in total length. I hung it in our big kitchen window, but was unable to take any good shots of it today as it was too gloomy for nice photography.

I also experimented with 3″ squares of wool blend felt (thinner) and marking the cut lines 1/4″ apart. I was able to use Fabric-Tac glue instead of hand stitching the corners. This felt was not rigid enough to hold the shape of the 6 piece snowflake when I tried to put several of them together. So, I opted to string them together vertically.

Felt projects inspired by paper projects is a natural. They don’t always translate, but the result can be surprising, evolving into something new altogether. Like, have you seen these felt bows? Even my ol’ pomander rosettes *grew* out of a paper project!

Please do not copy my original artwork or take images or content from this site without my explicit permission. All projects and tutorials are for non-commercial, personal use only. Thank you.